Today I finally solved a very strange bug in a Windows Mobile project Im currently working on. The bug would only show up on HTC devices, and not our HTC devices we had at our location. After the application was installed and the user started it, the whole device would freeze and reboot itself after a minute or so.

After some digging around, rebuilding, re-installing for way too many times; we found out that if the HTC TouchFlo 3D today plugin was enabled the device would crash. With that knowledge I was able to pin point the location of the failure which was that the installation DLL sends a WM_WININICHANGE message to refresh the PocketPc Today plugins.

As many sites and forum posts states, this is the only way to refresh the Today plugins.

Of course, this is not documented anywhere within MS documentation; and the documentation that exists states that the wParam isnt used at all (which in fact it is).

It seems that the HTC TouchFlo 3D isnt capable of handling the WM_WININICHANGE properly, and even just opening the calendar application after that sending that message will crash the device. So if your WindowsMobile application sends that message, I would advise you to look into this. Using the replacement message WM_SETTINGCHANGE does not change anything, the device will still crash.


One solution is to check if the HTC TouchFlo Today plugin is enabled, which can easily be retrived through the regkey "HKLM\Software\Microsoft\Today\Items\TouchFLO 3D\Enabled". If it is enabled, then do not send the WM_WININICHANGE message.
Posted by redsolo at 13:25
Labels: WindowsMobile, WTF

Trying out SimplifyMedia on Debian

I just noticed SimplifyMedia, and wanted to start sharing music from my home media server. The server is running Debian etch (4.0), and there is no debian repository for it (not surprinsgly as it is not open source). Here's a short description on how I got it to work on my Debian machine. 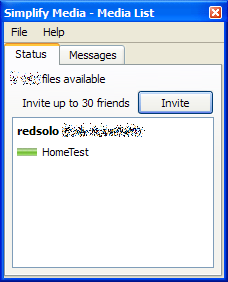 Impression
I was more impressed when reading about it than now after I've used it. The problems that it can not find all files, not able to play all files on a client; are a little too much for me to accept. But hopefully it will improve and become something great!
Posted by redsolo at 21:01
Labels: debian

Today I released a plugin that adds support for Microsoft's source control manager Team Foundation Server to Hudson (a continuous integration server). The plugin makes it possible to retrieve files and poll the server to detect changes on a project. If Hudson detects a change, a new build can be started automatically. Hudson will also display the changes that occurred in each build.

Configuring the plugin is easy as it is only requires the server URL and the path to the project. Hudson will take care of the rest, such as creating a workspace and work folder to store the files in.

So if you wanted to give Hudson a whirl but couldn't use it because you were using TFS, now is the chance to try it out! For more information about this plugin, check out the wiki. There are also several other .NET plugins for MSBuild, NAnt, NUnit, FxCop, StyleCop and compile warnings. I'm currently working on a plugin that integrates CodePlex into Hudson.

Update: The plugin can be downloaded here, or through the update manager in Hudson.